The entire Skarvan and Roltdalen National Park is actually part of the Sámi’s Saanti sitje / Essand reindeer grazing district. The way the land was used the past and is used today, shows just how the area is a living Sámi cultural landscape. In the national park you will find traces of all the different ages of Sámi from trapping to nomadic herding to reindeer husbandry.

The entire Skarvan and Roltdalen National Park is actually part of the Sámi’s Saanti sitje / Essand reindeer grazing district. The way the land was used the past and is used today, shows just how the area is a living Sámi cultural landscape. In the national park you will find traces of all the different ages of Sámi from trapping to nomadic herding to reindeer husbandry. 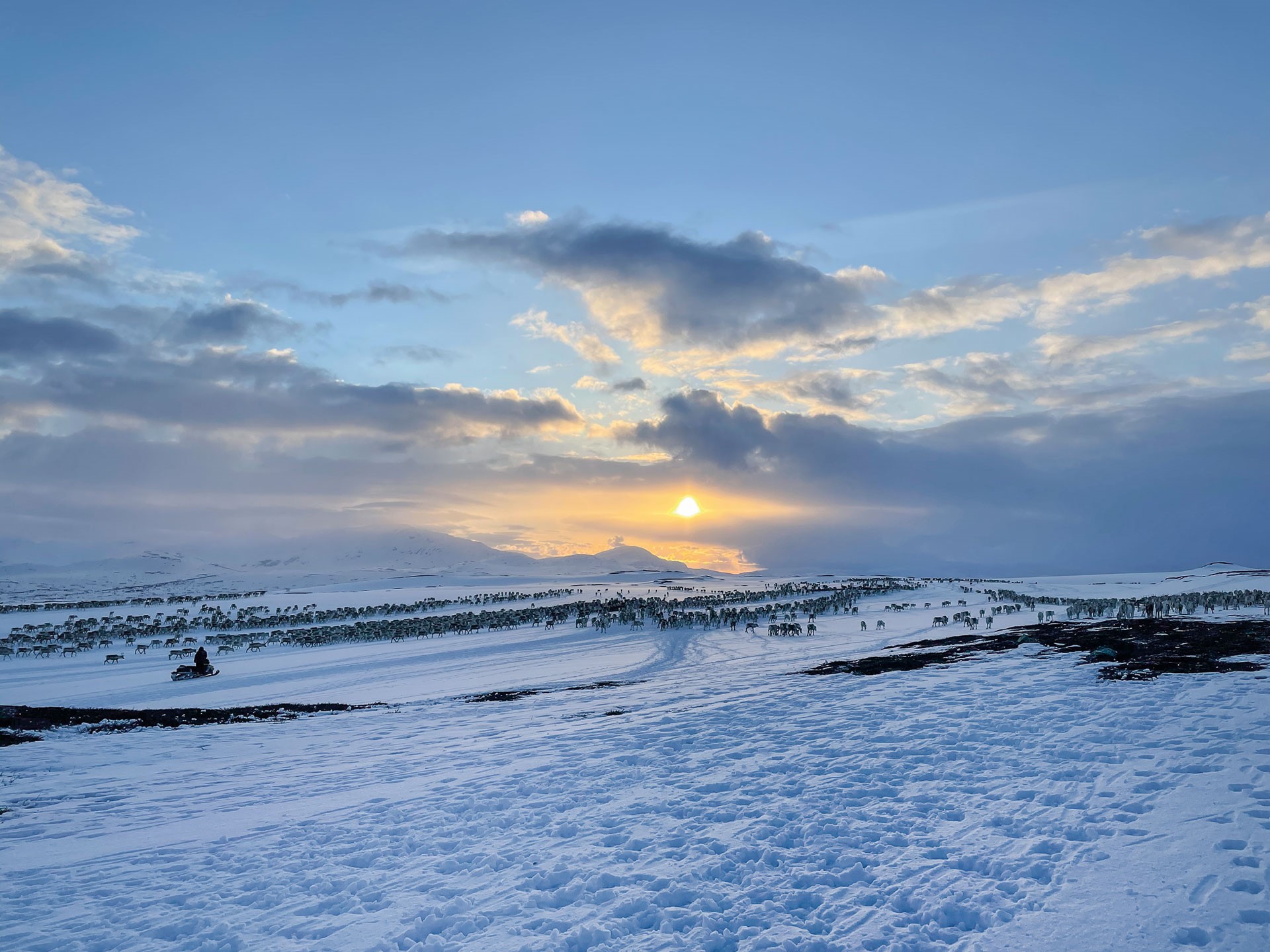 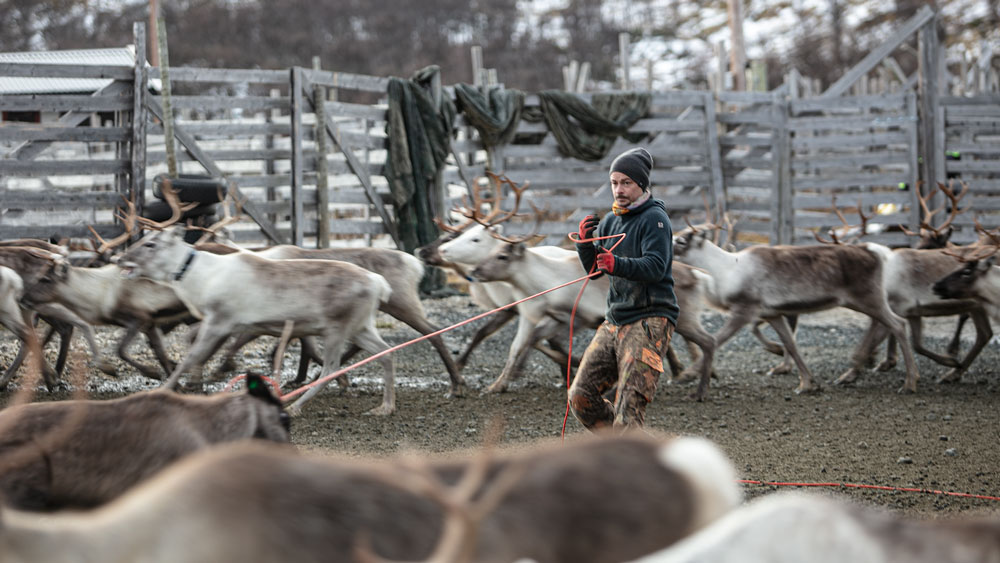 Skarvan and Roltdalen National Park is located in the middle of Essand / Saanti Sijte grazing district, and the land in the area is the habitat for South Sámi reindeer herding. The biggest current threat to reindeer and their future is the loss of grazing land and interference from people. Southern Sámi reindeer herding is fundamental to the preservation of South Sami culture and language.

As a hiker, show consideration and remember: 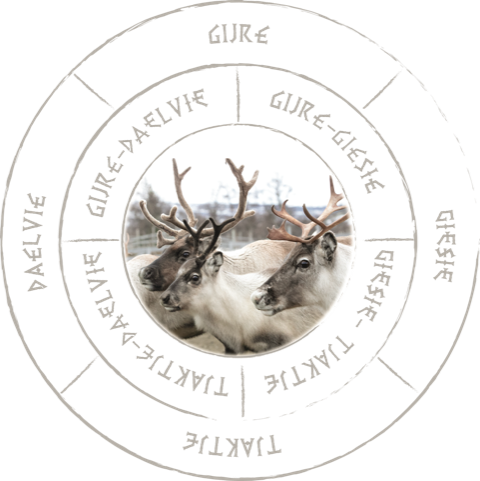 The 8 seasons of the Sámi reindeer herding year

Gijre-daelvie / Spring-winter: The reindeer migrate north from the Femund region towards calving country. They’re on the move.

Girje-giesie / Spring-summer: The reindeer wander down to graze on green pastures in the valleys.

Giesie / Summer: ID-marking of calves. In hot weather, the reindeer drive high into the mountains, partly to avoid insects.

Daelvie / Winter: The reindeer move towards Femund for the winter. They’re on the move.

Reindeer graze all-year-round in the national park. Most of the reindeer still migrate south to winter pastures in the Femund region as they have since time immemorial. The seasonal migrations between winter and summer grazing vary depending on the weather and driving conditions, but the reindeer still follow the old migration routes. Traditionally, the calendar year for reindeer herding runs from spring to winter. And in March/April, the first herds start moving back from the areas around Femund. From the middle of April, the rest of the herd returns to Saanti Sijte as calving time approaches. In the spring and early summer, the herds move to Sondalen and Skrøydalen or towards Stordalssiden depending on the weather and herding conditions. It is in these areas that the mating season starts. Here, the herds spread out across a large area from Skarvan and south to Ruten and eat towards the Swedish border. Calving takes place in all these areas. After calving, the females and calves move down to the low-lying areas of Stordalen, Torsbjørkdalen and Roltdalen.

Over the summer, the reindeer gradually move up the mountainside grazing as the snow disappears.

In July, it is time for the calves to be id-marked, so the whole herd gathers at the large grazing pen at Skarpdalen. Skarpdalen lies to the east of Fongen massif in Meråker municipality and outside the national park. A large part of the herd gathers in the mountain areas between Fongen and Skarvan. When all the reindeer have gathered in these areas, they are herded towards the large-penned grazing areas so the calves can be marked. After the calves are id-marked, the reindeer spread out over the whole district. In the autumn, the reindeer are herded for slaughter in Skarpdalen.When the rut is over in late autumn, the bucks release the female herds and a good number of them move south. The reindeer then move across the land in large herds. The reindeer remain in this area until the snow and ice conditions on the lake make it possible to move to the winter pasture at Femund.

Essand reindeer grazing district / Saanti Sijte has a population of approx. 4600 reindeer on winter pasture. Almost 3000 calves are added on dry land pasture. The district has 9 operating units. Reindeer husbandry is dependent on the areas being preserved and as intact and untouched as possible from technical activities, such as: cabin construction, road construction and the development of hydropower. That is why those working with reindeer were initially positive about making the area protected. However, the creation of the national park may have had unwanted side-effects on reindeer herding. The park has meant that the area have become more attractive as a tourist destination. With more visitors, this has led to increased activity in the area, which in turn may be having a negative impact on Sámi reindeer herding. Modern reindeer husbandry is completely dependent on grazing conditions, weather conditions, and the conditions for herding which all vary from year-to-year. 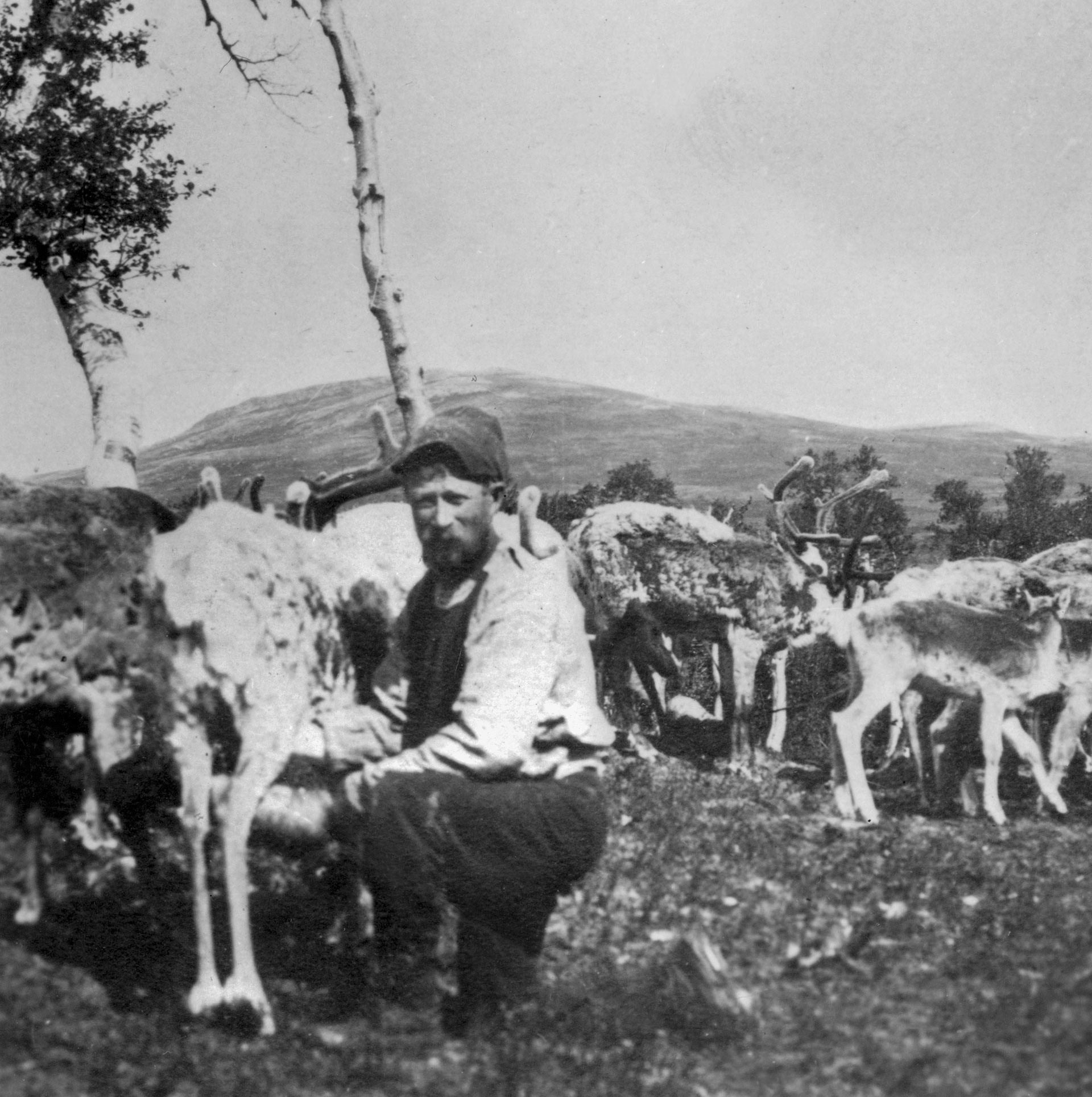 In early times, the Sámi hunted wild reindeer using trapping pits. Trapping-based reindeer herding was gradually replaced from about the 17th century by nomadic herding. The entire family moved around the countryside with the reindeer throughout the year, herding them to different pastures. The Sámi lived in turf huts or tents and lived off the land and the reindeer. There are cultural relics from different eras of reindeer herding in Skarvan and Roltdalen. Many of the Sámi cultural relics are quite easy to miss as you move about the countryside, so there are probably many cultural relics in the national park that have gone unnoticed.