Start $ About the National Park $ Farming in the mountains and pastures

Farming in the mountains and pastures

The pastures in Skarvan and Roltdalen National Park have, for many hundreds of years, been used for haymaking, grazing and farming. There is a total of 65 registered forest and mountain pastures in the national park. On many of the pastures, several farms had their own buildings. There remains a total of over 130 buildings. Hill and mountain farming reached its peak in the middle of the 19th century. After the war, farming hill and mountainside pastures decreased rapidly, and in 1969 it ceased altogether, with Stormoen being the last to close.

Start $ About the National Park $ Farming in the mountains and pastures

Farming in the mountains and pastures

The pastures in Skarvan and Roltdalen National Park have, for many hundreds of years, been used for haymaking, grazing and farming. There is a total of 65 registered forest and mountain pastures in the national park. On many of the pastures, several farms had their own buildings. There remains a total of over 130 buildings. Hill and mountain farming reached its peak in the middle of the 19th century. After the war, farming hill and mountainside pastures decreased rapidly, and in 1969 it ceased altogether, with Stormoen being the last to close. 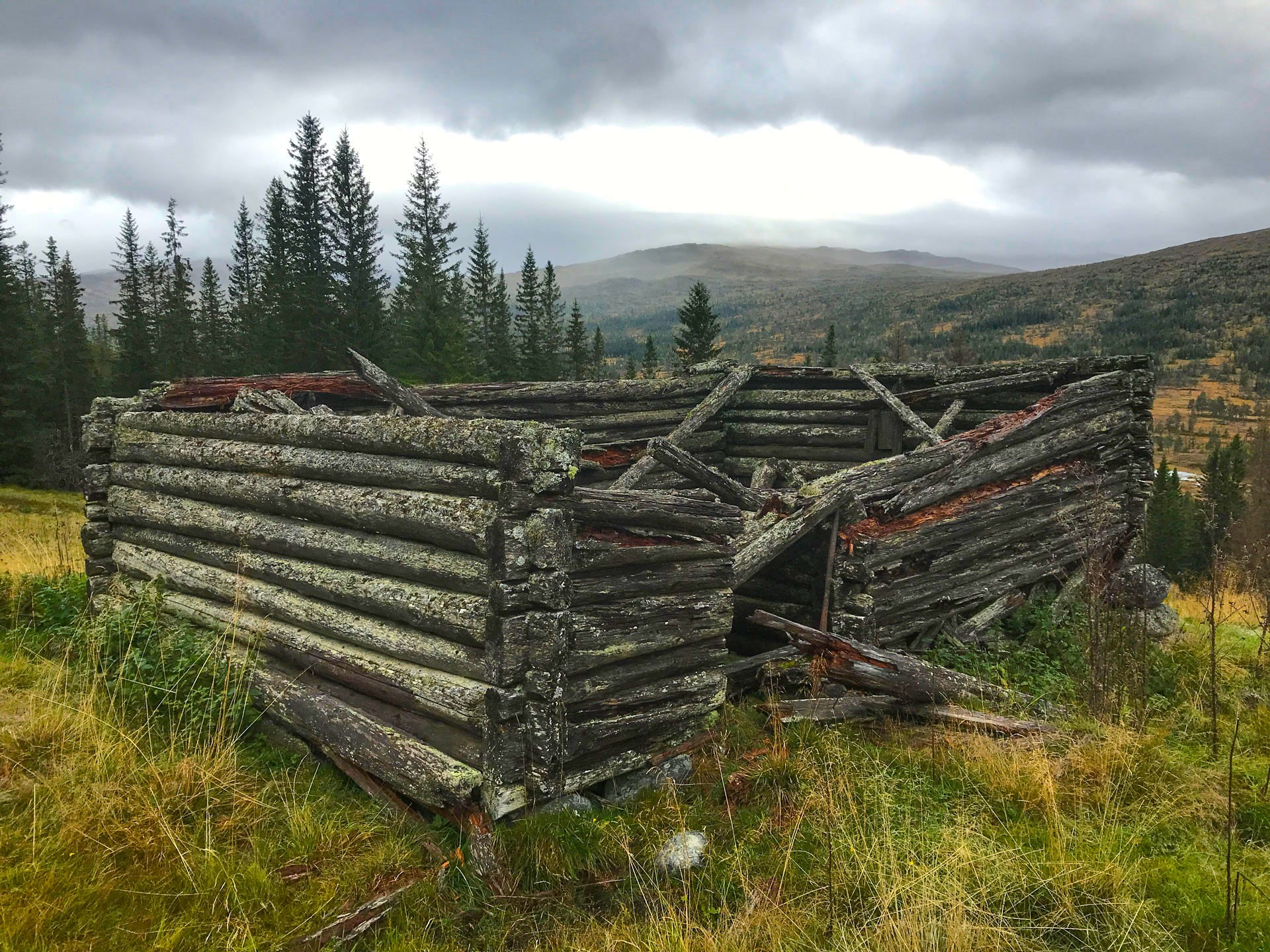 Hill and mountain farming took place in Roltdalen for several hundreds of years. It is uncertain how extensive mountain and forest farming on outfield pastures was before the Black Death, but the mention of deserted farms in historical documents indicates that there was both mountain and forest farming. There were even several permanent farm settlements in the valley. After the Black Death, it took a couple of hundred years before the number of inhabitants increased in the region and farmers began to farm the land. There was increased settlement and hill farming began in Roltdalen, Sondalen and Torsbjørkdalen over the course of the 17th century as the farms were divided and population increased. The need to use the land with outfield haymaking and farming increased sharply so that up to two-thirds of all grazing / feed for the farm could come from the forest, hills and mountain pastures. 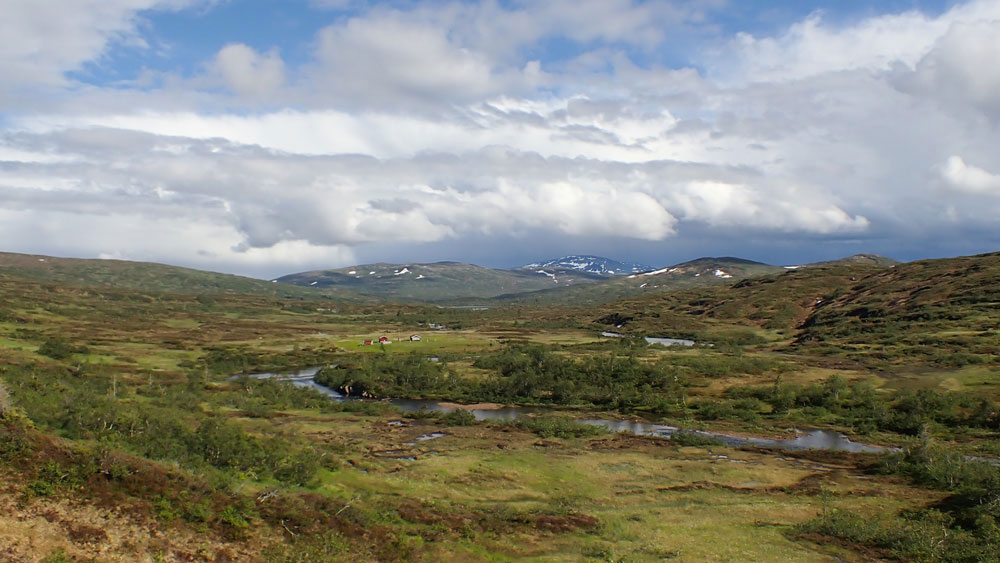 It was the farms on the east side of the valley – in Øverbygda in Selbu, from Hoem to Rønsberg – that had grazing pastures in Roltdalen and by Lake Kvernfjellvatna. Many farms had several hillside pastures for grazing: ideally, one for spring, one for summer and one for the autumn. In the national park, most were summer pastures because they could benefit from the lush mountain pastures

The hillsides were often named after the farmer or farm or by its location. How well the hillside farm cabins are preserved today varies; however, in general barns and cowsheds are characterised by a lack of maintenance. This is because the buildings are no longer in use. Several of the oldest buildings have been pulled down and replaced by new buildings. The new buildings have mostly been built at the same spot, following the main form and dimensions as before. The location and interdependence of the mountain pastures point to the kind of work that was done here in the past, as well as the historical use of the land and outlying fields. There are still several farmers who put their animals out to pasture and use the hillside farming buildings when checking on the animals. They are even used as holiday homes.

Some of the pastures are still actively maintained: spruce trees are felled, shrubs removed, and hay-cutting and animals are put out to graze. On the mountain pastures of Stormoen, Svenskmoen, Røssetvollen and Øver Stubbvollen, maintenance care has been done in collaboration between the owners of the land and the national park since 2015. This has yielded positive results in the form of less overgrowth and a richer flora. 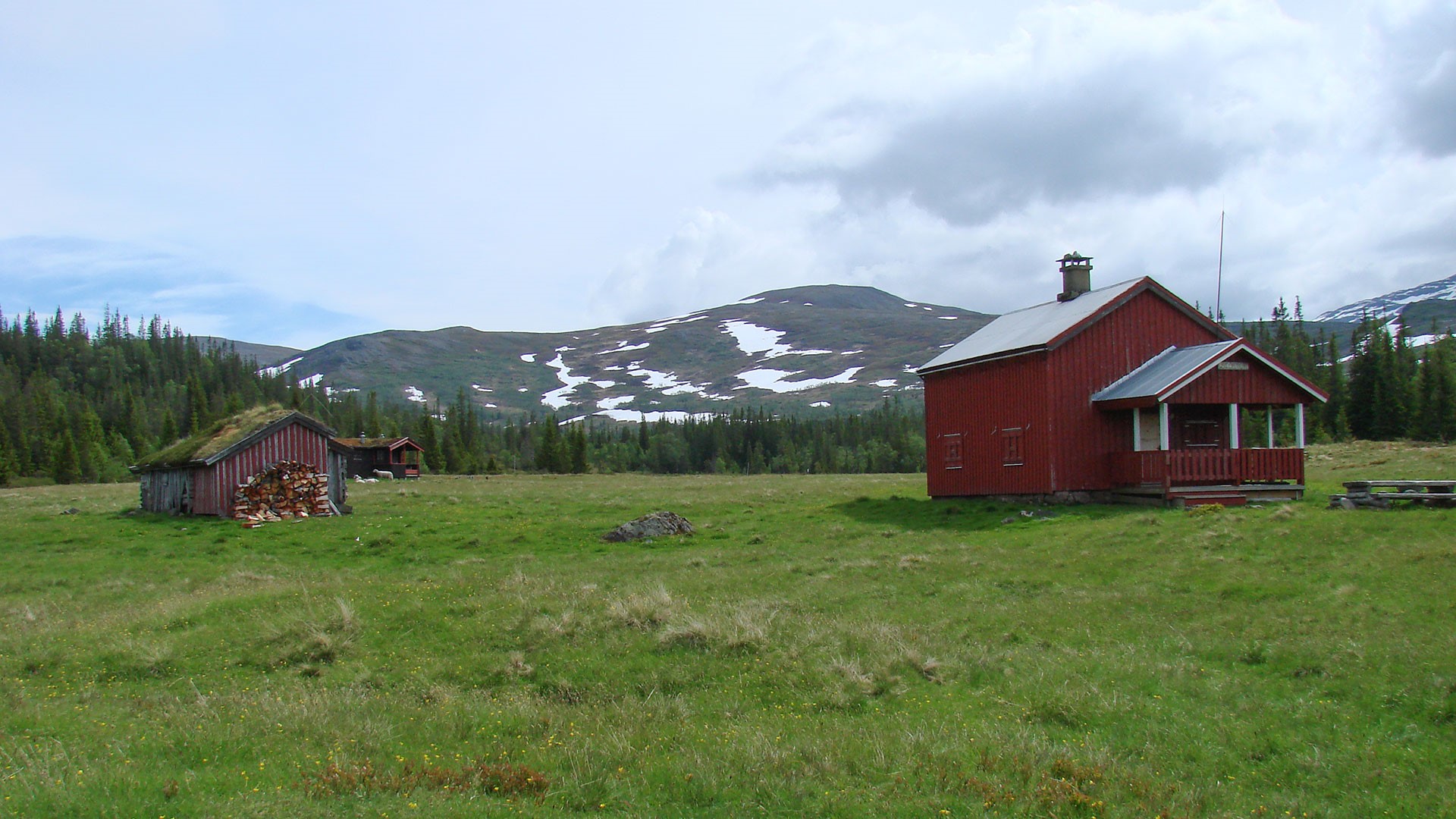 The hamlet of Stormoen is located deep in Roltdalen, on the north side of Rotla close to Schulzhytta tourist cabin on the largest alluvial plains at Rotla, formed during the melting after the last ice age. There was early activity here, and a large slag heap with the remnants of the smelting furnace testifies to iron extraction taking place here nearly 2000 years ago. When a new farm building was built on top of the mound in 1930, parts of the kiln were discovered.

There are three farms that have farmed the mountain here: two from Evjen and one from Kyllo. In the period between 1756 and 1810, when Selbo Kobber-Værk (Selbo Copper Work) still had the smelting unit at Hyttbakken in Selbu and operated several mines in Meråker, there was considerable traffic transporting copper ore and black copper down Roltdalen, and there was a need for labour in the mines. The works were given a licence to establish a workers’ colony at Stormoen. The mountain farms had to move further inland into Roltdalen and four houses were built for the workers and their families. In 1801, 5 families lived there with a total of 22 people, including several children.

In 1812, hillside farming started once again at Stormoen and one of the houses that was built that year is still on the hillside today. From 1929 until Schulzhytta tourist cabin was complete in 1948, the Tourist Association had an agreement in place for the use of two rooms with a total of four beds in one of the buildings. In 1969, mountain farming came to an end at Stormoen – the last in the area. The last few years were spent mainly delivering milk and milk products to Schulzhytta. 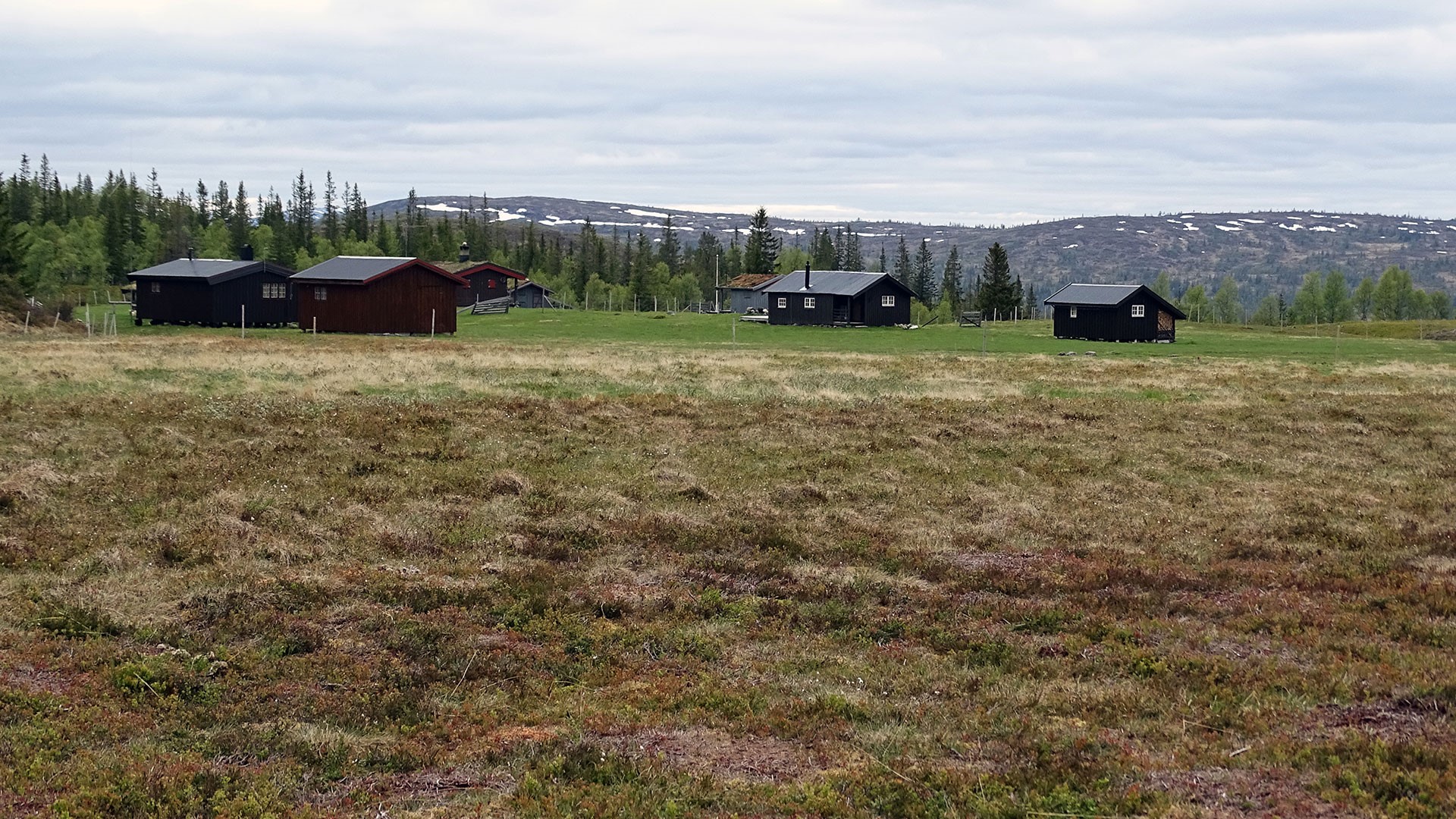 Svenskmoen is located approx. 1 km east of Stormoen, on the south side of Rotla. It is a slightly smaller river terrace sitting approx. 50m higher in the terrain. It is not known where the name comes from, but it probably has something to do with the fact that Swedes were once there. Whether it was Swedish soldiers during some of the attacks on Norway in the 16th and 18th centuries, or Swedish refugees like at Essant in 1611/12 remains uncertain.

Svenskmoen was also a central point during the latter part of the 18th century when the copperworks were important. It is not known whether there were permanent settlers there, but it was used as a place for people and horses to rest when transporting ore and black copper.

Four farms settled at Svenskmoen, all from Velve. They had the spring pastures in Elvådalen, a valley adjacent to River Garbergelva. When they moved towards Roltdalen towards the end of the summer, they were initially at Gamle Velvansvollen, which is located just across the river, south of Stormoen. After another couple of weeks, they moved on to Svenskmoen. Gamle Velvansvollen ceased to be in use after the end of the 19th century. Mountain farming at Svenskmoen also eventually ceased, and only the spring pastures in Elvådalen and Hoven, deep in Krossådalen valley, were used.

In later years, sheep were put out to pasture at Svenskmoen, and the grass on the pasture was cut and taken away to be used for many years after farming here ceased. 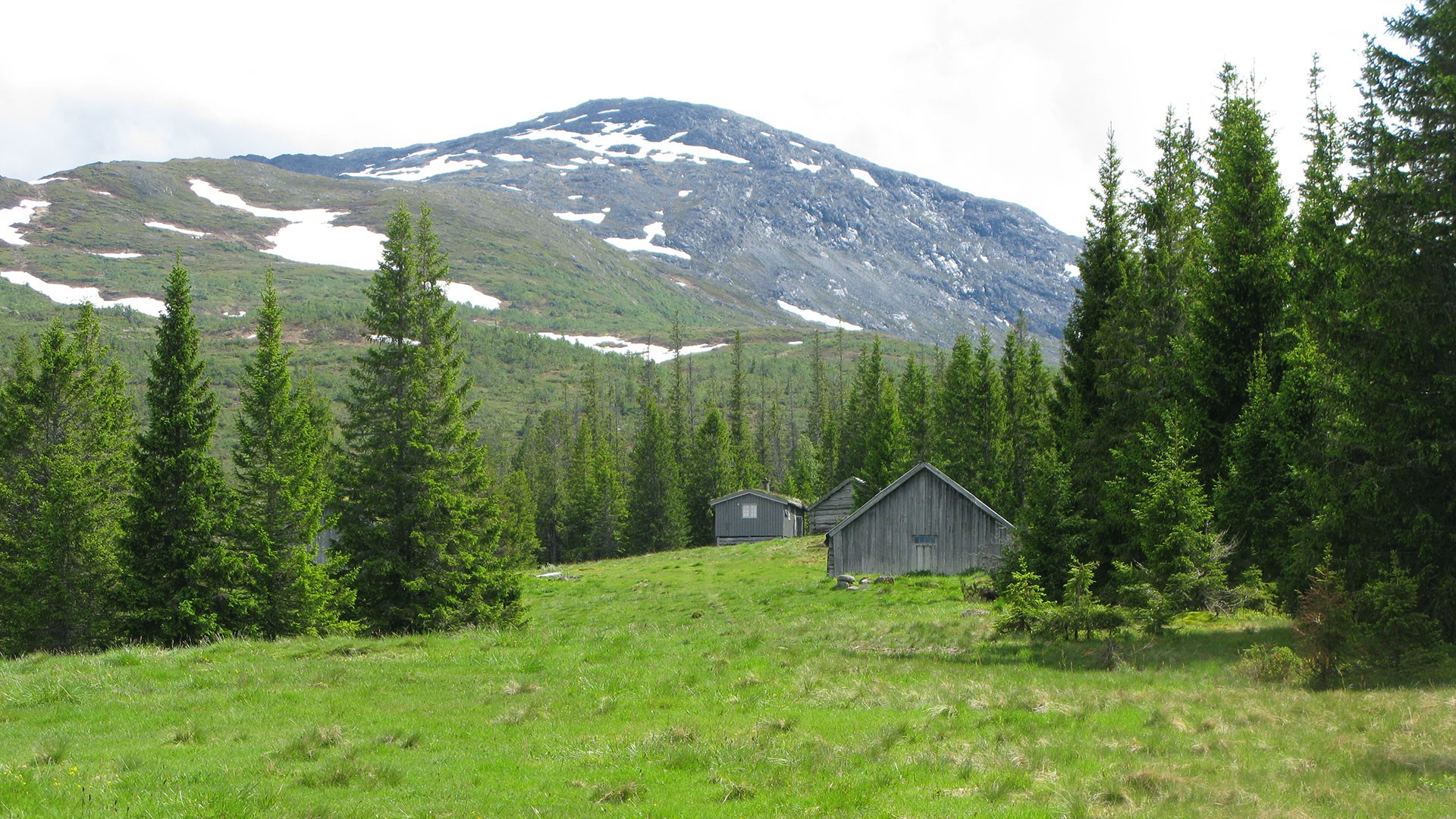 The most studied iron mining facility found in the national park is at Liavollen. The remnants of three smelting kilns and large slag heaps were found at the bottom of the hillside. Dates show that the mine was in use in the first centuries of the Common Era (AD 80 – 405).

There are two ancient barns on the hillside and, according to studies that have been made, one is from the end of the 18th century and one from 1805. 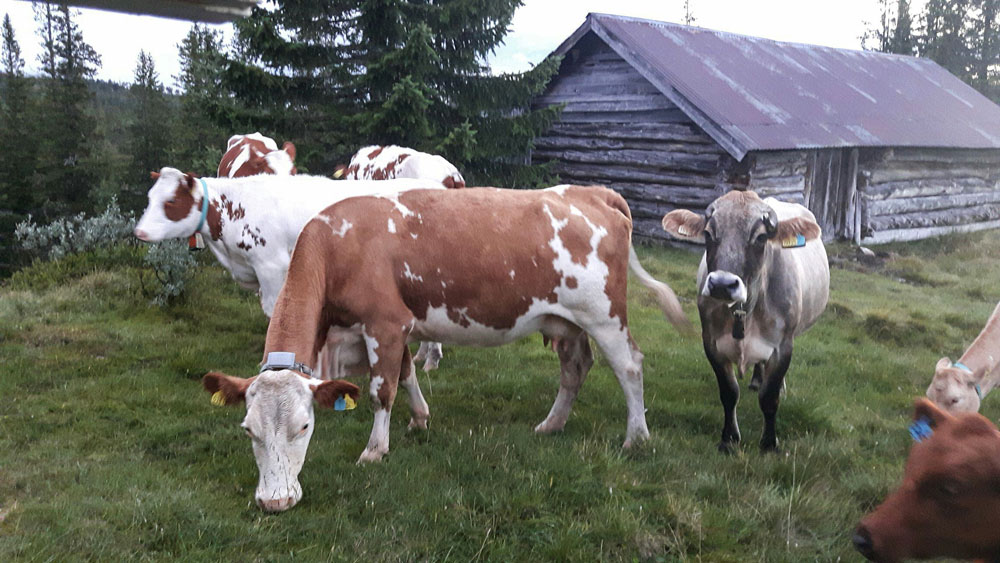 There has been no road construction in the national park; however, paths and tracks exist as a result of all the activity that has taken place over the years. Most of it goes from east to west. There are primarily three activities that have left a mark on the terrain: the transportation of copper, mountain farming on the upland pastures, and to a certain extent the work with millstones.

The work with millstones took place mainly in the winter. The workers travelled on skis and the stones were transported across icy snow in early spring. Nevertheless, a travel route was marked out from the quarries in Høgfjellet to Krossådalen. This is mostly located outside the national park.

In the first half of the 18th century, copper was transported from Gammelgruva mine at Måltoppfjellet, south in the park, down to Rolset and to Hyttbakken. In the second part of the 18th century, the ore came from Litjfjellgruva mine in Meråker, via Svenskmoen or Stormoen. After that, the route they took varied. Some went over Høgfjellet, while others followed along Rotla and over Nerfjellet.

As for the hillside paths, these were formed where the land was driest and easiest to walk. It was the transport of butter and cheese (sulphur) every fortnight that eventually made it essential to improve the pathways and steps. During the final decades of the hillside farms in the uplands, it was no longer necessary to take everything in a paddle sack; instead, travel was now possible by horse and carriage in Roltdalen.

Rotala has always been a difficult river to cross. It quickly became flooded and dangerous. During the years when there grazing pastures in the valley, there were no bridges over the river. The first was built between Stormoen and Svenskmoen in conjunction with the construction of Schulzhytta tourist cabin just before 1950. Later, two suspension bridges were built at Møllenhusvollen and Søndre Evjevollen (Anevollen). The tourist association has also built bridges over several of the tributaries to Rotla and over river Garbergelva at Stubbvollen.